Murder at the Queen’s Old Castle 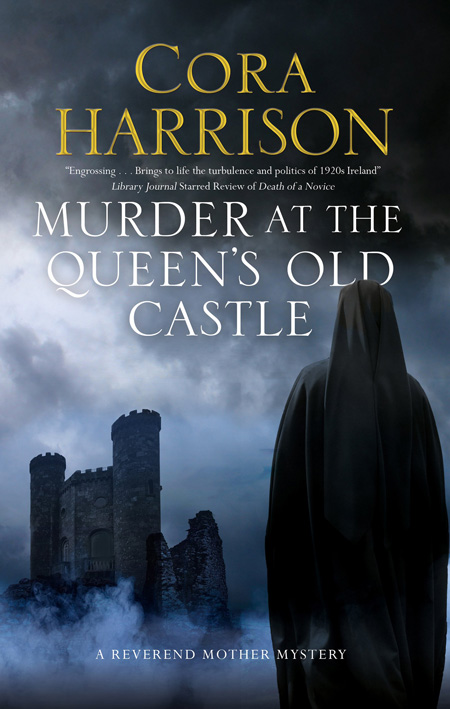 Murder at the Queen’s Old Castle

The sixth book in the Reverend Mother series

Ireland. 1925.Despite its regal name, the Queen’s Old Castle is nothing but a low-grade department store, housed within the decrepit walls of what was once a medieval castle, built at the harbour entrance to Cork city.

On her first visit for fifty years, the Reverend Mother is struck by how little has changed – apart, that is, from the strange smell of gas …

But when the store’s owner staggers from his office and topples over the railings to his death, Mother Aquinas is once again drawn into a baffling murder investigation where suspects are all too plentiful.

An unpopular man, Joseph Fitzwilliam had been disliked and feared by all who worked for him. And when the contents of his will are revealed, suspicion widens to include his own family ...

Harrison is at the top of her game in her sixth whodunit set in 1920s Cork, Ireland, featuring the Reverend Mother Aquinas (after 2018’s Death of a Novice).

Joseph Fitzwilliam, the notoriously tight-fisted owner of a “shop selling cheap clothes and household linens” known as the Queen’s Old Castle, has offered to let the reverend mother take her pick of water-damaged goods to distribute to the city’s poor. While doing so, the religious leader is horrified to see Joseph, who’s clutching a small barrel-shaped canister used for transporting change, fall over a railing outside his office on an overhead platform to his death. The canister smells of gas, suggesting he was poisoned. Joseph’s hysterical widow, who witnessed his fatal fall, cries murder, then points her finger at 14-year-old shop employee Brian Maloney, accusing the boy of mistakenly killing her husband instead of herself.

While the politics of the time are not central to the plot as in other entries, the fair-play puzzle is among Harrison’s finest. Publishers Weekly

Harrison delivers another entertaining installment in her charming historical-mystery series set in 1920s Cork, Ireland, and featuring Reverend Mother Aquinas, who has a knack for getting involved in murder cases. This time the murder victim literally lands at her feet while she’s shopping in the Queen’s Old Castle department store. She’s come to the store at the invitation of old Joseph Fitzwilliam, the dour owner, who’s agreed that Aquinas can take some of the items damaged in the recent flood for the poor children who attend the reverend mother’s convent school.

Shocked by the murder, she teams up with her old friend Dr. Scher and her former pupil, police Inspector Patrick Cashman, to find the killer.

There are plenty of suspects, from the victim’s rather odd family to the poorly paid clerks who work at the store to the young and badly treated shop apprentices. Using her powerful intellect and her intimate knowledge of the citizens of Cork, the reverend mother is the first to understand the motive behind the terrible deed.

Sparkling descriptions of life in 1920s Cork and fascinating historical details combine to ably support a clever plot and an intriguing cast. Booklist

A nun solves a mysterious death, but not to her satisfaction. The Reverend Mother has gone to the Queen’s Old Castle department store in Cork to pick up flood-damaged merchandise for her poor students. Despite his miserly reputation, Joseph Fitzwilliam, the store's owner, has offered the Reverend Mother anything she needs for no charge. Reverend Mother is being helped by Brian Maloney, a shop apprentice who was once a pupil at her convent school, when Joseph topples over the railing outside his second-floor office and plunges to his death.

Agnes Fitzwilliam, Joseph’s wife, accuses Brian of murder. Luckily, Reverend Mother’s dear friend police surgeon Dr. Scher happens to be there and quiets the hysterical woman. The investigating officer, Inspector Patrick Cashman, is another former student with whom Reverend Mother has worked on several other murder investigations (Death of a Novice, 2018, etc.). Evidently one of the gas canisters brought back from the war by Maj. James Fitzwilliam, the shop owner's son, which was being used to fumigate the damaged goods after the flood, has been sent up to Joseph’s small, windowless office by means of the change carriers that run on wires from each department, and the gas overcame him, causing his plunge to the floor—a chancy but ultimately effective means of murder.

In addition to his wife, Joseph’s daughters, Monica and Kitty, work at the store, and his younger son, Robert, is the floor manager. They all come under suspicion when the police learn that he’d just changed his will,leaving almost everything to James (who wasn’t in the store at the time), a pittance to his daughters and wife, and nothing to Robert.

Reverend Mother uses her extensive Cork connections to gather information on the family and the browbeaten workers, any of whom may have had a motive. After much thought the Reverend Mother comes to a shocking conclusion—but can she get the evidence to prove her theory?

This sixth entry (after Death of a Novice) in the popular 1920s Ireland–set “Reverend Mother” mystery series begins with a sale at the Queen’s Old Castle department store in Cork. Reverend Mother Aquinas, accompanied by Brian Mahoney, a former student who’s now apprenticed at the store, witnesses the murder of the despised shop owner Joseph Fitzwilliam. Eileen MacSweeney, another former student who’s now an aspiring reporter, rushes to sell the story to the local paper.

Yet another previous pupil of the reverend mother, Insp. Patrick Cashman, discovers that many store employees had opportunity to commit the crime and the victim’s family all had motive. Mother Aquinas pursues her own investigation as increasing violence at the store leads her to believe all the witnesses are in danger.

VERDICT: A very public murder on the shop floor with a store full of suspects presents a classic conundrum. Mother Aquinas shares the narrative with Eileen and Inspector Cashman providing an array of insights and detection methods. This highly readable historical series is perfect for fans of authors who focus on a vivid locale such as Andrea Camilleri and Ann Cleeves.